The Little Green Striker of Froginess

With the Furybird II build going so slowly, and Zena's Ginetta still stalled at the 'nearly ready stage', I needed a car to do the se7ens list Butcher in the Boarders 2004 tour in, and also to use to go down to Le Mans. There were two preferences - preferably a Jeremy Philips design, and preferably a BEC. Fortunately, a very nice chap called Andrew Thomson had a bright green Striker with a Kawasaki ZX9R engine for sale. The downside was that it was in Hull, but with a few daytime passes from SWMBO I not only got to see it, but to go and collect it and drive it back to London.

The plan was to buy something usable and not do any work on it. Needless to say, things didn't work out quite like that...

Below is a list of links to other pages setting out the changes I made. Many thanks go to Dave Hackett for arranging for some garage space - I couldn't use mine as it's full of Fury chassis. 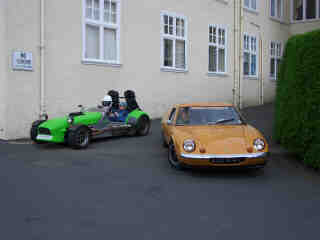 The car behaved itself extremely well on the Butcher in the Boarders tour. The picture on the right is me and Zena about to leave Peebles hotel for another day's blatting. The rather tasty Europa in the picture belongs to Steve Wiseman who yet again ended up breaking down in his intended tour vehicle on the way to meet up with everyone. Fortunately, he'd just bought the 'ropa so was able to bring that along. The colour is officially called Bahama Yellow although it's now (almost) universally known as Mango Beige...


And just to finish off, some shots of the Striker on tour... 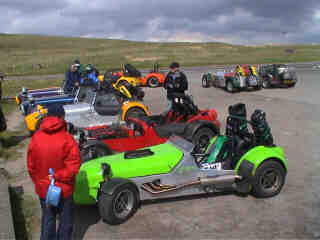 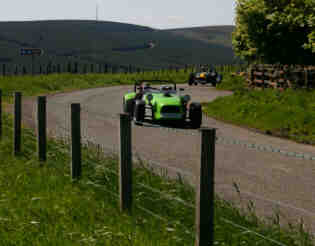 At the moment, I'm changing some of the bodywork, respraying the car, and fitting new brakes. Details of the new work are here.