I've always liked the idea of paddle shifters - not only does it make the transmission tunnel much less cluttered, it also means (obviously) that you can change gear without letting go of the steering wheel - a definite bonus in my book.

I had originally intended to use cables for the shifter but Tim's rod operated version has persuaded me otherwise. The Furybird I's gearshift mechanism was rod-based and I never really thought it was terribly good - however, I think this was due to the way it was made rather than the principle. I've made up the paddles themselves - these are just made from one bit of bent ali tube, some plates and a thick rod. Looks like this - 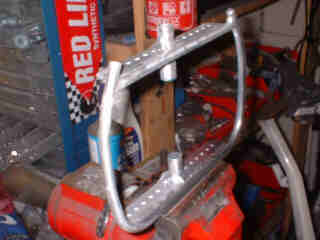 I welded the paddles together with Adrian's help, using his TIG welder. TIGing flat sheet is easy, I found - TIGing internal corners in thick sheet isn't. Still, we got there eventually.

As you can see from the paddles, I'm going to be mounting them from both above and beneath the steering column. The current plan is to use the various mounting points on the Sierra steering column to fix brackets to. However, I need a new steering column because

1. The one I've got at the moment isn't straight, and

2. I've chopped half of the mounting points off, and some have fallen off when I clamped the steering column in a vice in a really numpty way.

UPDATE: The ali paddles above have been fitted to the FuryRacer. The FuryBird II is going to have carbon fibre paddles. Well, no surprise there then...