Happily, the GF is also a petrolhead. When she went to China for a year, I built the Fury - I was going to build a Westfield but she pointed out that the Fury was a much more attractive car. When she came back she was a bit miffed, as she decided that she'd rather like a Fury but thought that his'n'hers Furies would be a bit sad.

Happily, she decided that in fact she preferred the look of the Ginetta G20. 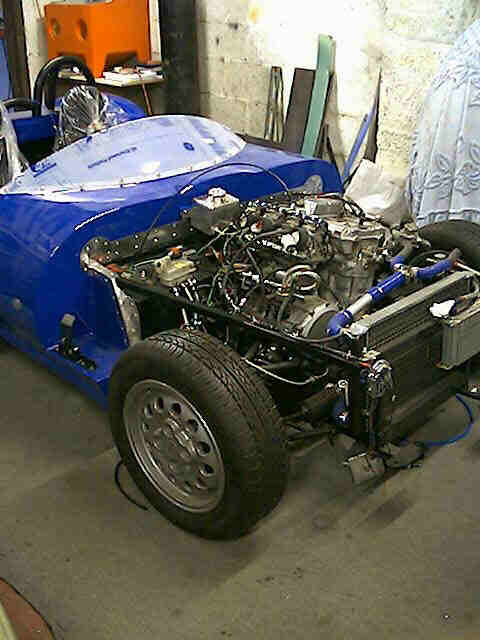 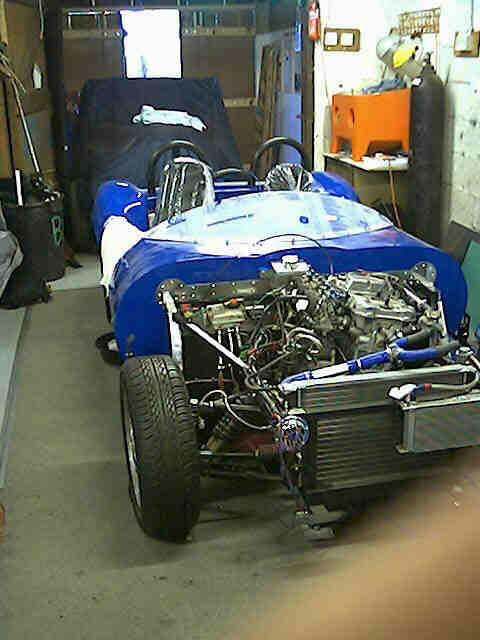 The car was mostly built at Zena's parents' garage, as seen above during the build. It then came to live in my garage, where I finished it off and got it through SVA. 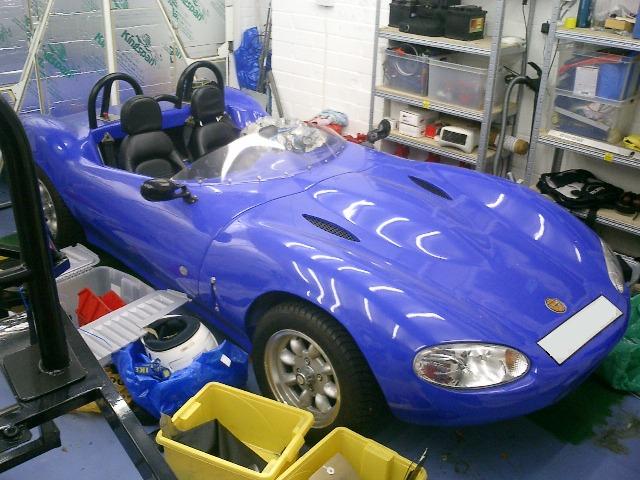 The G20 is a derivative of the Ginetta G27, which is now sold in modified form by Evolution [link]. Unlike the G27, it has no doors, no screen and no roof. So it's a bit like a Fury Spyder really. The main difference is the chassis - the Fury is a true spaceframe chassis, while the Ginetta's not. It's more like a cruciform chassis with some extra chassis tubes added higher up for various things to dangle off. It's also made from substantially more steel than a Fury chassis. The largest tube in a Fury chassis is a 16 gauge 2" x 1" chassis member at the back of the chassis. The lower engine bay chassis members in a G20 chassis are 2" by 2" with walls about 3mm thick...

The GF's engine of choice was a Honda CBR1000F lump. Having driven the Furybird, she was decidedly taken by bike engines, and the CBR1000F was a proven and cheap lump. In hindsight, it probably wasn't the best choice. Although it was fairly cheap (we got the engine, carbs, CDi unit and loom for 400 quid) in the overall context of the build an R1 wouldn't have cost that much more, would have been far easier to install, much lighter, and probably in rather better nick due to being a much more modern engine. However, the CBR1000F did mean that emissions tests were pretty straightforward at SVA, given that the engine we got dates from 1991.

The build went slowly but without any major problems. The hardest thing was working out how to squeeze the CBR1000 lump in the surprisingly narrow engine bay of the G20. Then we got to SVA...

Never, ever, ever go to Newcastle SVA test centre. Well, not until the current tester moves on. We went there 5 times, and failed each time. OK, so some of the fails were entirely justified. But towards the end it was getting silly. The rule that testers can't fail you on things they've passed you on before was comprehensively ignored. One time the seatbelt heights were OK. The next time, on a retest, they weren't. On one test he accepted the steering column was collapsible. The next test he wasn't so sure. On the fouth test the mirrors weren't done up tight enough and so might move around. On the fifth test the mirrors were done up too tight and might vibrate.

Eventually, we gave up at Newcastle. After the fifth test it became rapidly apparent that this bloke was never, ever going to pass the car under any circumstances whatsoever and would always find something to fail it on.

So we took it to Norwich. It failed the first time on a few relatively minor things, which I fixed, and it passed after a 5 minute retest.

The biggest fix required for the retest was the self-centering. The car had never self-centered very convincingly, although the SVA tester at Newcastle had in fact never failed it on that. However, at Norwich it did fail on that, although the fact that the front offside tyre had only 8psi in it (the tyre has a very slow puncture and I'd forgotten to pump it up) may have had something to do with it. It's entirely possible that with a bit more air in the tyres and by jiggling the suspension settings around we could have got it to pass.

However, two things concerned me. Firstly, the car didn't self-centre if you pushed it fowards, but it did with no little vigour if you pushed it backwards. This suggested to me that it had negative camber. The second, rather more concerning problem, was that when the suspension went to full droop, the upper suspension arms hit the springs and knocked them off the spring mounts on the dampers. This was with standard Ginetta wishbones, uprights, springs and dampers, so appeared to be an inherent design flaw rather than a cock-up on our part. And yes, the upper wishbones were the right way round...

In the end I made up some new wishbones which, rather than a simple 'V' shape are a rather more compex shape in order to clear the springs. The wishbones now don't knock the springs off the mounts at full droop and self-centering, while still not entirely convincing, is significantly better than it was before.

Around 5 years after we started building the car, it was finally road legal and registered, with the registration process at Peterborough DVLA proving to be much more straightforward and stress-free than we had anticipated.

back to the title page