Having gone for an IRS chassis, the old fuel tank was never going to fit, and anyway I never like the steel Midget tank, so I sold it. Various off-the-shelf tanks would fit, but as ever I decided to make life difficult for myself and get one made up specially. I ended up going to Allyfab who made me a foam-filled custom tank for a very reasonable price. 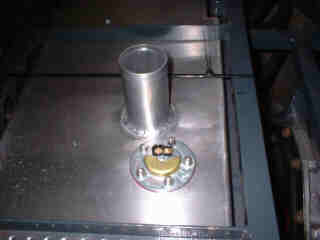 Because the tank's foam-filled I couldn't use a normal 'float on an arm' fuel level sender, so I'm using a VAG group VDO sender which is basically a tube with a float in it and a linear resistor. This bolts into the top of the tank and goes through a hole in the foam inside the tank.

The picture on the left shows the fuel sener in position. I've sealed it round the edge with threadlock - this is resistant to petrol and doesn't dissolve into a nasty filter-clogging goop like silicon does. Hopefully it'll seal it nice and tight - if it doesn't then I may need a cork or rubber gasket underneath the sender. 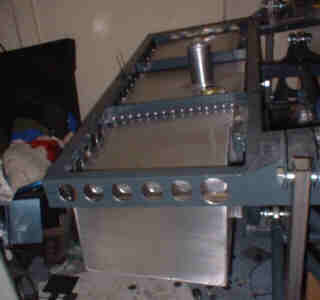 To the right is a picture of the tank in place. You can see that it takes up all of the space available - the front of the tank is even extended slightly to fill in the space between the rear suspension mounts. The tank will be held in place using a number of welded tabs with foam on them (to locate the tank laterally and longditudinally) and will be supported by 3 aluminium strips, again covered in foam. The strip brackets go onto 40mm bolts welded to the underside of the chassis members.

You can also see in the picture on the right some steps I've taken to lighten the chassis. On the live axle Fury chassis you need the 2 inch chassis member as the leading arms making up 2 of the 5 bar suspension on the back end mount onto it. However, on the IRS chassis, the only think it does rearwards of the damper mounts is hold the fuel tank in place. So, I took out my selection of hole saws, and got down to some serious neighbour annoying...

Ultimately the holes will be covered by very thin strips of carbon, rivetted and sealed into place.