The Furybird I had some rather nice Nitron dampers on it, so I wanted to re-use these. However, I'd cocked up when I ordered them originally. I'd got the closed and open damper lengths from Mark Fisher for the Spax units he used as standard (I think they now use ProTech dampers as standard) and got the Nitron dampers made to those specs. However, Spax closed lengths are measured when the top of the damper hits the large bump-stop - there's still quite a lot of travel left. Nitron don't quote their closed lengths that way... The net result was that the dampers were a bit short on travel and due to the way they were made were actually rather too long.

The other problem was that in a rare moment of economisation, I'd ordered the dampers with metalastic bushes - given that the whole of the suspension is going to be rose-jointed, it makes no sense to have spongy damper bushes.

The length issue I'm hoping to resolve by ordering a lowered chassis but keeping the damper mounts standard - this should allow me to use the extra damper length at the front of the car, although I'll have to change the damper mounts at the back of the car by raising them a fair bit.

As for the bushes, I measured the OD of the metalastic bushes and it seemed to be 1 1/8". I found some spherical bearings with an OD of 1 1/8", ordered 8 of them, and started getting the metalastic bushes out of the dampers. This is, of course, a total pig of a job. I find the easiest (sic) way to do it is to drill lots of holes in the rubber centre until it and the inner metal tube fall out, put a hacksaw through the resulting hole and very very careful saw the outer part of the bush into two pieces. Takes hours, smells a lot, and is bloody hard work. 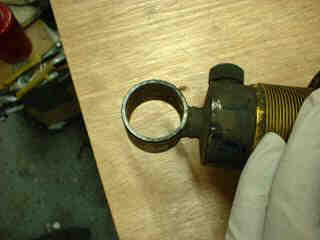 Once the metalastic bush is removed you're left with this - 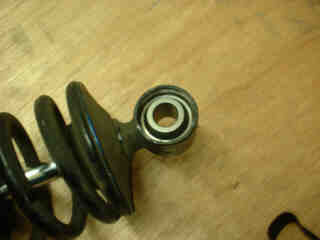 Then it's just a question of using a suitably sized socket to press the spherical bearing in using the vice, with plenty of bearing lock fluid just in case. The spherical bearings have a 1/2" internal bore, the same as the metalastic ones, and the same as the existing mounts on the chassis and suspension parts. The bearings are held very firmly in place once they've been pressed in and it's certainly cheaper than getting them converted professionally.

The bearings I used were National Bearings YSSB8s from Autosport Bearings - they're stainless steel with PTFE liners and are rated at maximum static radial load of 26,100 lbs - should be just about enough...

Current status: Waiting for ProTechs to arrive. Then I've got to start thinking about spring rates.